Meet the people behind the ranch!

Myriam’s introduction to development work came as a Peace Corps Volunteer during a major drought in Niger, West Africa ('83-'85). She lived in a village without running water or electricity and was tasked with the job of conducting prenatal consultations and teaching nutrition to mothers. This was all well and good until the size of the village more than doubled from the influx of refugees who could not afford to buy food. The task fell to her to "find food !" She also found funds and constructed 8 hand dug concrete wells with fellow villagers. This experience profoundly influenced her perspective on "Development Work" and the vital role that sustainable income and livestock animals have on people living at the Base of the Economic Pyramid. She subsequently became a veterinarian, graduating from UC Davis, and a farmer with a strong focus on food and draught animals both here in the USA and in the Developing World.

Currently she runs a farm with her husband and two daughters in California. She is the Co-Executive Director and International Program Director for DG Educational Services, a non profit focusing on agricultural education in the US and in Lessor Developed Countries (LDC) and a Farmer to Farmer Volunteer in Haiti with Partners of the Americas.

As a Farmer to Farmer volunteer, she works as a catalyst in the development of a Haitian conceived and run agribusiness called Makouti Agro Enterprises. Makouti is a Haitian agricultural organization started by Benito Jasmin that unites farmers, allowing them to pool their resources to overcome obstacles. They are working together to build the meat rabbit industry from the small rural farmer up through export, strengthening agribusiness leadership and accountability, exploring and expanding potential markets in other agricultural products like honey bees, coffee, cacao, poly-culture farming, agrotourism, etc. and increasing the income potential of the over 6 million Haitian subsistence farmers.

Hunger alleviation can’t be solved with a single focused mission, which is why her consulting has taken her down many paths from shipping supplies, leadership and accountability training, liaison between villagers and US funders, to animal management and vet care. As a hybrid professional and a development practitioner, she strongly believes in helping the under served find their voice, define and share their desires, integrate globally, create sustainable positive evolutionary change and reinforcing collaborative networks to build sustainable foundations especially in agriculture. The creation of agricultural entrepreneurial opportunities is key to sustainable development. As much as possible she tries to avoid long term financial dependency on US funds and tries to focus these funds on initial set up, education and follow up through the learning curve stages of a project. Farming is not easy but it can put the power of development back into the hands of the village people.

Please feel free to contact her as she is always eager for more eye opening experiences and to share challenging brain storming exchanges with others interested in the development arena. 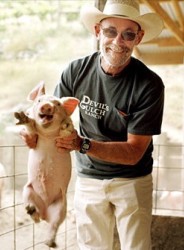 Mark grew up in Southern California but always dreamed of escaping the city and becoming a farmer. In 1971, at the age of 19, he bought the 65-acre heart of the 873-acre ranch known then as Devils Gulch Ranch. Subsequently, Congress included the ranch within the boundaries set for the expanded Golden Gate Recreation Area in 1980 and bought all but Mark’s 65 acres. From 1866 until sometime in the 1940’s, the ranch was used as a grade B dairy (producing cream that was sold and skim milk that was fed to hogs). From then on until Mark’s acquisition of the property in 1971, it was vacant, used only for grazing cattle.

The barn on the property was originally built in 1866 and has been remodeled by Mark twice. Because the ranch was off the grid, Mark installed a windmill in 1973 which was his sole source of electricity until 1980, when he planted the vineyard and connected to Pacific Gas & Electric to pump water for irrigating. In 2004, he replaced the old windmill with a much larger one that feeds into Pacific Gas & Electric using net-metering just as solar panels do.  Recently a 24KW solar panel system was installed on the roof of the old barn.

Mark has raised pigs since his arrival at Devils Gulch Ranch, using brewer's grains milk, bread and tortillas as primary finishing feeds. The rabbits began as 3 breeding does for 4-H projects 12 years ago, and have increased to well over 2000, in order to meet the demand (French Laundry, Chez Panisse, Perbacco, Jardiniere, Auberge du Soleil, Bardessono, Cantinetta Piero, Zuni, Kuleto’s, Flour and Water, Poggio, Magnolia, and many more).

Dutton-Goldfield and Sean Thackrey both produce Devils Gulch Ranch Marin County Pinot Noirs from the vineyards, which pair extremely well with the meats they produce. Mark produces his own compost for the vineyards from the rabbits, pigs and sheep that he raises. He was one of the first in California to graze his sheep in the vineyard during the winter, a trend that is more commonplace now. Mark sits on the Sonoma County (really district 3) Winegrape Commission, the Petaluma Gap Grape and Wine Alliance, the Marin County Winegrowers Association, and was past vice president of the North Coast Grape Growers Association.

Many restaurants have offered Devils Gulch nights featuring their meats and wines from their grapes. Several times a year there are events at the ranch in order for people to have the opportunity to meet Mark and Myriam, visit, taste, and purchase the products from Devils Gulch Ranch. Mark welcomes questions, dialogue, and networking with anyone interested in food, farming and animal husbandry.